If you read my last post (see here), you know that my G Adventures 35 day Overland Truck tour had a 13 hour day yesterday, driving through Tanzania, to Dar Es Salaam, where we spent the night camping.  The next morning we were packed up and left by 7:30am via Tuk Tuks, with Stone Town, Zanzibar as our destination!  Stone Town (a World Heritage site) is 95% Islam with an average life expectancy of 48 years and the main sources of income are tourism and the sale of spices. 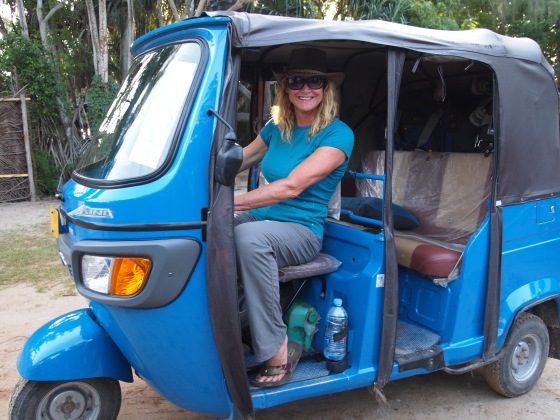 Our Tuk Tuk drivers transported us onto a ferry for a short ride to the main ferry that goes to the island of Zanzibar, located approximately 20 miles off-shore and takes about two hours to reach.  We arrived at 11am and this was my first view of the island…

We made our way to Mazson’s Hotel, where we would stay for one evening, before heading North to a beach resort in Nungwi, which is located about an hour away.  This was my room and my roommate’s name was Suzanne.  She is from Belgium! 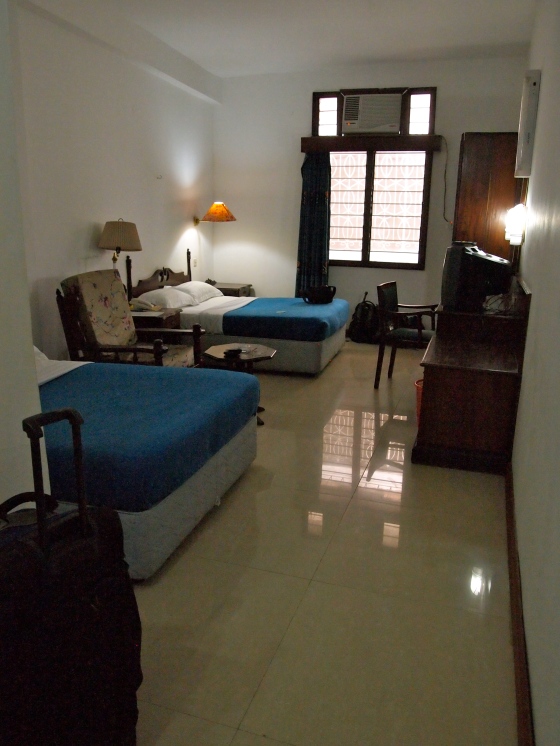 This was the view across from the Hotel…

Because this was an ending and/or beginning point for G Adventure trips, new people joined our group.  I met Samantha and Kathleen, Scientists from America, and they said they had gone out walking around Stone Town and didn’t like the assertive touts trying to sell things to them.  We had learned how to say “No Thank You” in Swahili, “Hapana Sante”, so the three of us set off to get lost in the winding, narrow streets of Stone Town.  It was an odd feeling to not consult a map…to just walk and not care if you didn’t know where you were. 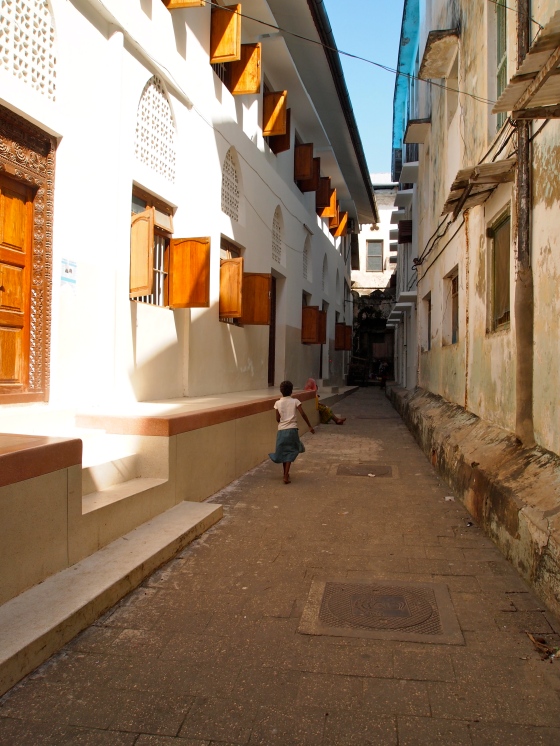 I had a good time saying “Hapana Sante” with a smile on my face and the touts seemed to like it!  It became a game!  It reminded me a bit of Egypt, but they weren’t as aggressive… or I was just more prepared.

The architecture, people and culture of Stone Town, Zanzibar were very intriguing to me!

Hiking Machu Picchu is one of those “once in a lifetime” experiences and I enjoyed every moment of the three and 1/2 day, 27 mile hike!  I was traveling with 10 other fellow adventurers on a G Adventures trip in May of 2009.  We had visited the absolutely breathtaking Lake Titicaca  and were on an all day public bus ride to the beautiful and vibrant town of Cusco, which is located about thirty minutes by train to the start of the Inca Trail hike.  Typically, we traveled by private van, but this trip was an exception.

The road to Cusco from Lake Titicaca is very curvy and mountainous.  Unfortunately for the other passengers, I had intestinal problems.  The bus was swaying from side to side along the twisting roads and the restroom was small, dark, and void of toilet paper.   I couldn’t avoid the imagined glares from passengers as I had to utilize the facilities a few times that day!

For the previous two weeks, we had gradually risen in elevation within Peru, which is a good thing when you’re going to hike the Inca Trail.  Altitude sickness can strike young, old, fit or not…so if you can acclimatize…all the better!

END_OF_DOCUMENT_TOKEN_TO_BE_REPLACED

Riding a camel in Egypt should be on everyone’s bucket list!  Although it was a unique experience, once is enough.  Having ridden on a donkey and an elephant, I discovered a camel is more awkward and uncomfortable.

Your Egyptian experience is also not complete (in my opinion) unless you partake in smoking some “Shisha” aka “Hookah” aka “Hubbly Bubbly“!  A few of us…the restless rebels…would stay up past bedtime…drink Turkish Coffee and smoke the flavored tobacco! 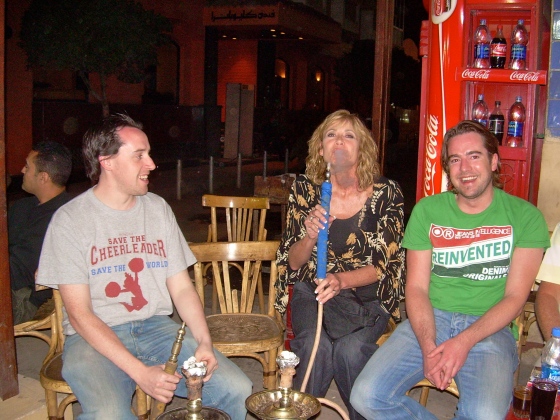 We spent one night sleeping on a felucca sailboat on the Nile River.  After dividing into two groups of about 7 each, we boarded separate boats for our adventure.  It was quite obvious they split us according to age.  The other boat held the 25-34 age group and our boat was the 35-65 age group.  What’s interesting to me, is that the “restless rebels”, as I mentioned earlier, consisted of the older age group. 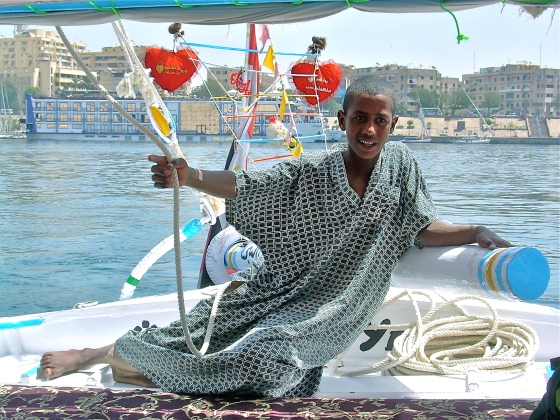 A separate boat called the “service” boat was available for mealtimes and use of the bathroom.  The “restless rebels”…stayed up after the others went to bed and were talking on top of the service boat when it became noticeably windier.  Out in the distance a huge black mass was approaching quickly…

when we queried the workers, they said it was a sandstorm.  The sense of danger and exhiliration resulted in an immediate rush and feeling of…aliveness!  We were engulfed in sand for a few minutes.  I still remember the sand pelting my skin, leaving a tingly feeling.

We rode donkeys to the Valley of the Kings and if you wanted your donkey to go faster you would say “hopa hopa”. 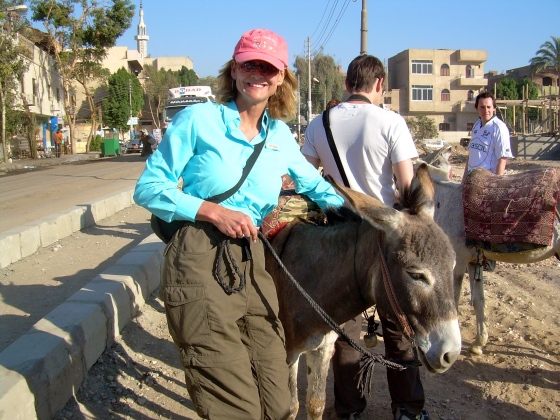 My donkey liked to go fast…just like me…and every time someone else would say hopa hopa – my donkey would run.

I raced one of the guys and almost fell off.

The Karnak Temple is located in Luxor, Egypt.  The entire complex which spans 1 mile x 2 miles, was built over a period of 1300 years, beginning in the 16th century BC, and is the largest ancient religious site in the world.  The last three photos are a portion of it… 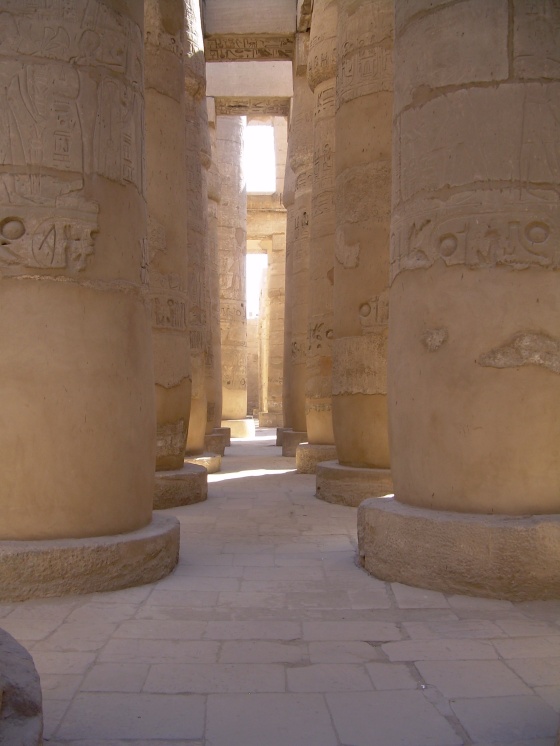 This morning I made us an omelet, 12-grain toast, strawberries, blueberries and banana for breakfast.  We drove 1 1/2 hrs. to the Mesa Verde National Park in Colorado, which is also a UNESCO World Heritage Site.  I was driving and after we paid the $15 entrance fee, there was another somewhat “scary” mountain road to traverse before arriving at the top where the Park was located.

We waited in line for about 30 minutes for tickets to the Cliff Palace and then went to the Museum for a 20 minute video about the Park.  We then toured Spruce Tree House.  This is the walk down to it… 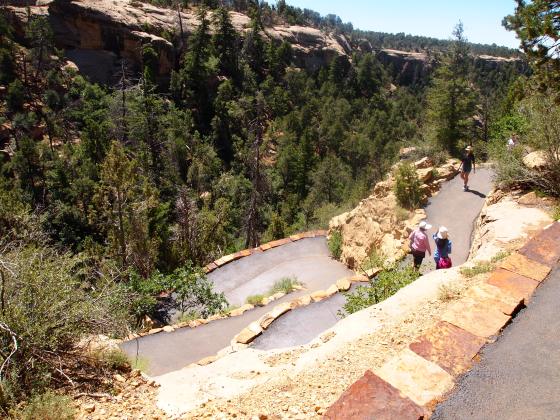 After eating our picnic lunch, we were ready for the 1:30pm tour of Cliff Palace.  It almost looks like a miniature reproduction…

The tour guide was very friendly and made the tour interesting…

We had to climb some ladders… 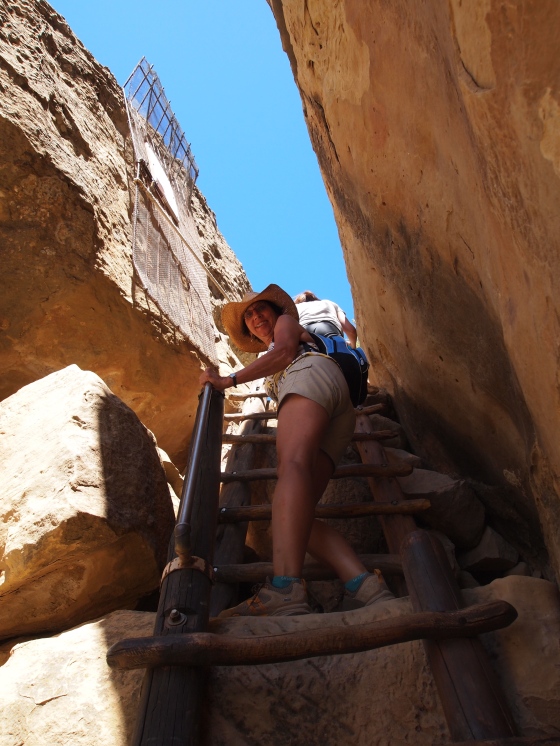 We had dinner at Francisco’s, which was very good.  Next stop was the Balcony Bar & Grill, where there was live music and very strong drinks!  We had a long island, which we nicknamed “After Mesa..Got Verde Wasta”.    This is the duo…it looks like she’s naked, but she’s not! 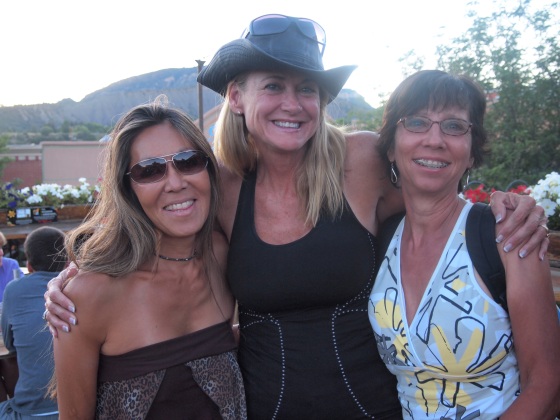 It was another great day!!

Like Loading...
Your visits are my reward. I prefer not to accept awards...thank you for the thought!