Home organization can be a time-consuming and tedious job, especially if you’re organizing someone else’s things.  For the past 1 1/2 years, I’ve been helping an elderly man sort through his mass of accumulated paperwork that he’s held on to for up to 25 years, along with other household items.  Together, we created a filing system that works for him.  He has an extensive library of books, but was willing to donate and sell six boxes of them.  I usually work once a week, occasionally twice, with a few long breaks in between.  Sometimes, he would schedule me to come back 10 days later, but then we played catch up with his mail.  Only two months into the project, I was escorting travelers from my Travel Spirit Meetup through Europe for a month.   He had been the caregiver for his 90-year-old wife, who had Alzheimer’s, and she passed away only a couple of weeks after I returned from Europe.  A few weeks after the funeral, I took him out to see a movie, “The Giver”, knowing he would appreciate an outing.  Although he missed her, he was also relieved from the physical and mental burden her illness had placed upon him.  With no children of their own and his niece, nephews, and other family living out-of-town, I’m sure he was lonely at times.  We went through her things about five months after she passed and took them to the Goodwill.

In the beginning of the process, he was quite hesitant to throw away paperwork, thinking he might need it again.  Through the years, he had kept detailed records of expenses and income with Quicken, but didn’t have an external hard drive, so that was his Christmas present from me.  My father, who passed away in 2006, was a hoarder (just like the show), so I’ve had some experience with this syndrome.

There were mornings I’d arrive and he’d still be in his pajamas, hearing aids in the bathroom.  I pride myself with being efficient, but I had to learn to slow down and be patient.  I usually had an agenda upon arrival and would tell him what I thought we should do that day.  Sometimes he would agree and other days, even with me saying “pretty please”, he refused, wanting to work on something else.

Each day, I would arrive with a salad to share with him.  Along with lettuce, they typically had cucumber, celery, red bell pepper, Kalamata olives, mushrooms, and red onion.  Occasionally, I’d put some Feta cheese and pine nuts in, along with my homemade Balsamic Mustard Vinaigrette.  He’d offer me one of his cookies or chocolate for dessert.

I’m sure that growing up during the depression shaped the way he looked at things, causing him to be very thrifty and frugal.  Expiration dates on food don’t matter to him.  If something was broken, perhaps he could find a way to fix it, rather than just throw it out.  As the months went by, I noticed he became much better at throwing paperwork away and making decisions, rather than putting it off.

I’ve made him laugh a few times.  On one occasion, I was helping him set up a Craigslist account online to give away some old Hitchcock chairs that he’d been paying $50.00 a month to store, and he was looking through the drop down for what year he was born in, and I said, “are you sure that year is even listed?”.  One morning when I arrived, he announced he realized he had a problem with putting things back where they belong.  I said, “and you just realized this?”

The retirement center he lives in is absolutely gorgeous!  There’s a swimming pool, exercise room, beautiful dining room, sun room, library, chapel, gift shop, gardens, weekly housekeeping, and countless activities…crafts, parties, movies, game nights, yoga, Tai Chi, day outings for shopping, plays, and the symphony.  He’s an accomplished pianist and loves going to the symphony.  We’re in the process of downsizing his things to move from a two bedroom to a one bedroom.

I feel fortunate to have had this experience.  I’m somewhat of a minimalist and can’t live with a lot of stuff around me, so it feels good to help someone else shed some of their weight.  Here are the “before” and “after” photos of his office and living room… 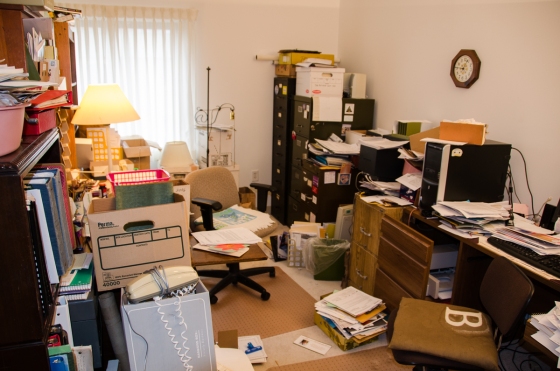 Doesn’t it make you want to say…Ahh!

p.s.  We’re continuing to go through other things that are kept in two storage rooms at the facility and five boxes of sentimental items (photos, cards, etc.)

21 thoughts on “Home Organization – Before and After”