The Heineken Experience in Amsterdam is interesting.  I think they could make it better if they let you start drinking from the beginning and if you’re tired of walking, like a lot of tourists, make it more like an amusement park ride, where you sit down and it takes you through each room!  Anyway, first, you walk through a number of rooms with interactive displays and historical things to read and a cute girl that gives you the background of beer making…mixing barley, hops, water and yeast.

Anyway, eventually you make your way to the tasting room…then more displays…then finally you get two small beers at the end, where it’s really crowded and there’s a huge line for the beer.

Here’s where the beer used to be made… 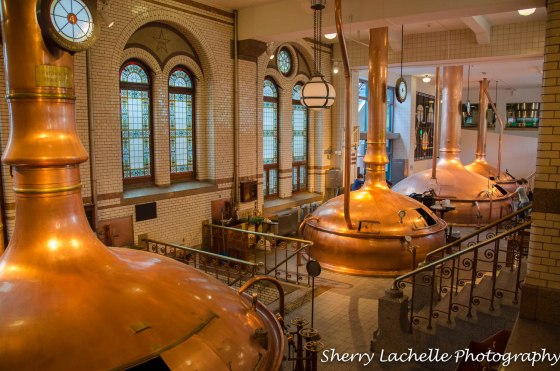 This guy was so nice and I loved his bow tie and attitude!

This is Tobias…Richard’s German Cousin.  Doesn’t he look so similar to the founder of Heineken?

Well…the tour’s over!  See you tomorrow with more Amsterdam highlights!!

11 thoughts on “The Heineken Experience in Amsterdam”