The Astronomical Clock in the center of Old Town Square is on the tourist’s “must do” list, so we did it.  There were twelve of us traveling through Eastern Europe for 11 days.  Shifting from one leg to the other to take pressure off of my back, it was hard to believe I was finally there.  When the figures finally did their thing (I forget now what they did because I watched a clock in Munich also), it was a bit anti-climatic.  I was more interested in taking photographs of the amazing architecture and people! 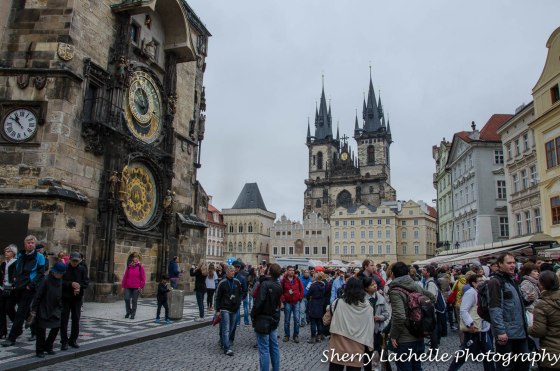 I loved watching the giant bubble maker making his bubbles and children trying to pop them!

Here’s a section of Wenceslas Square in New Town.  We were able to walk everywhere from our hotel.  Prague is a very walkable City. 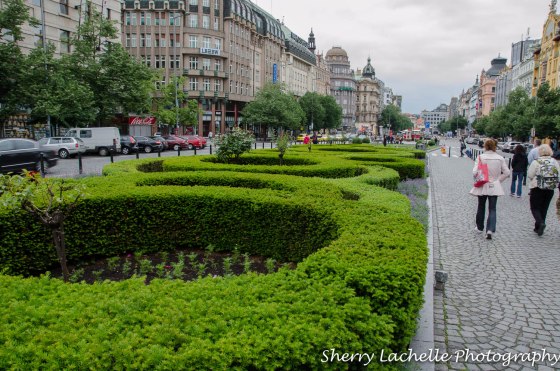 This bronze memorial by Sculptor Jaroslav Rona is of the famous writer Franz Kafka.  It’s located in the historic Jewish Quarter where Kafka spent most of his life and is where a Catholic church and a synagogue stand next to each other.

The tall black sculpture represents a headless male figure in a suit with a somewhat smaller figure of Kafka sitting on his shoulders and is taken from Franz Kafka’s early short story “Description of a Struggle“.  I’ve read that the headless suit figure is also of Kafka, depicting his feelings while working a boring insurance job.

Later in the day we took the funicular up to Petrin Hill and explored more of Prague.  I’ll see you tomorrow for that part of the adventure!

16 thoughts on “Old Town vs. New Town in Prague”