Hiking Machu Picchu is one of those “once in a lifetime” experiences and I enjoyed every moment of the three and 1/2 day, 27 mile hike!  I was traveling with 10 other fellow adventurers on a G Adventures trip in May of 2009.  We had visited the absolutely breathtaking Lake Titicaca  and were on an all day public bus ride to the beautiful and vibrant town of Cusco, which is located about thirty minutes by train to the start of the Inca Trail hike.  Typically, we traveled by private van, but this trip was an exception.

The road to Cusco from Lake Titicaca is very curvy and mountainous.  Unfortunately for the other passengers, I had intestinal problems.  The bus was swaying from side to side along the twisting roads and the restroom was small, dark, and void of toilet paper.   I couldn’t avoid the imagined glares from passengers as I had to utilize the facilities a few times that day!

For the previous two weeks, we had gradually risen in elevation within Peru, which is a good thing when you’re going to hike the Inca Trail.  Altitude sickness can strike young, old, fit or not…so if you can acclimatize…all the better! 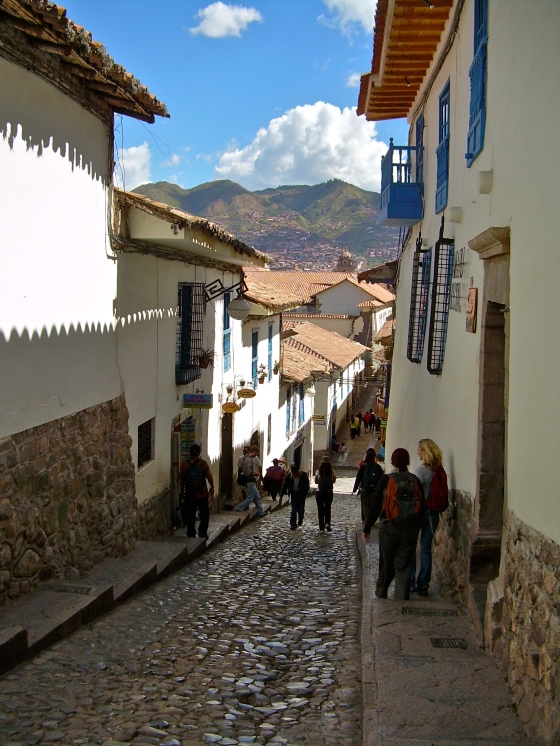 A view of town from higher up…

Peru’s government restricts the number of people allowed on the trail each day to 500–and 300 of them are staff…porters, etc.  Here are the  guidelines:  http://www.andeantravelweb.com/peru/treks/incatrail_regulations.htmll.  There were a number of different tour groups there, assembling for the start of the hike.

The Porters would carry most everything for us…to include bedding, tents, food, water, etc…and amazingly, would run ahead of us to set things up each day for our daily lunch break and overnight camping.  We carried a day pack that held water, jacket, sunscreen, camera, etc.

Here’s our crew for the start of the hike.  There were only six of us from our original group of 11, because a couple of them weren’t doing the hike and the other three were hiking a different trail to Machu Picchu, because of the daily hiker size restrictions. 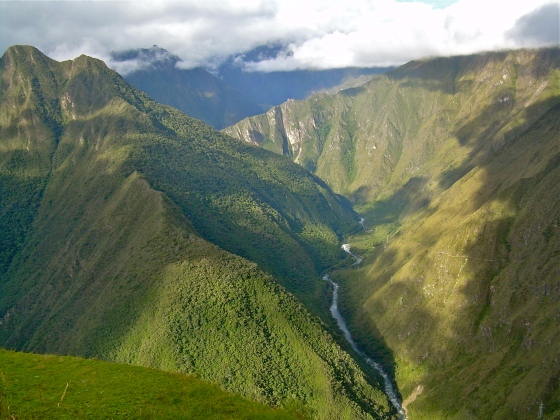 The three-day hike was challenging…especially the climb to “Dead Woman’s Pass” at 14,000 foot elevation.  I was chanting “Inca, Inca, Inca” to myself for 15 minutes of the final ascent to reach the pass.  Kind of a self meditation and motivational trick!  Although I was the oldest person hiking…I was second to arrive at the pass…not really bragging…well maybe a little!

We were taught the art of chewing coca leaves to ward off fatigue, hunger, thirst and altitude sickness.  According to Wikipedia…the leaf and its extracts are used in household products such as teas, toothpaste and condoms (betcha didn’t know that).  They are used as medicine, for nutritional value, and in religious ceremonies.  A de-cocainized extract of coca leaf is one of the flavoring ingredients in Coca-Cola. Before the criminalization of Cocaine, however, the extract was not de-cocainized.  Therefore, Coca-Cola‘s original formula did include Cocaine.

There has been controversy as to whether the leaves contain a trace amount of Cocaine when chewed or brewed, whereas some studies have confirmed that Cocaine is not an active ingredient and other studies have shown trace amounts.  The prohibition of the use of the coca leaf except for medical or scientific purposes was established by the United Nations in 1961.

Despite the legal restriction among countries party to the international treaty, coca chewing and drinking of coca tea is carried out daily by millions of people in the Andes as well as considered sacred within indigenous cultures.

We were paired up with someone for the camping.  This is one of the spots we camped at.  Each morning we awoke to a warm bowl of water with a wash cloth and a cup of hot coffee.  What pampering!  It was quite chilly at night, but warm and snuggly in the sleeping bag.

The food was excellent!!

We were awoken at 4:00am on the fourth day to hike the last few miles, so that we could arrive at daybreak.  Unfortunately, it was cloudy, but in some ways that created more mystery and intrigue.  And for me–this trip truly was not only about the destination, but the journey! 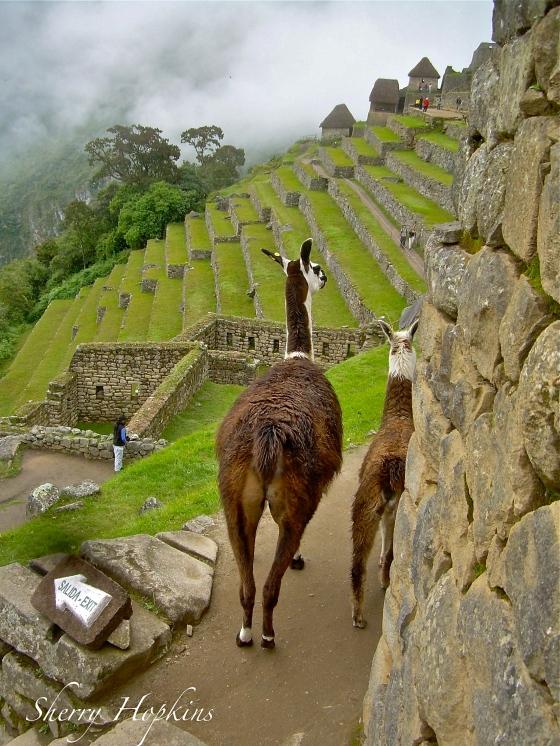