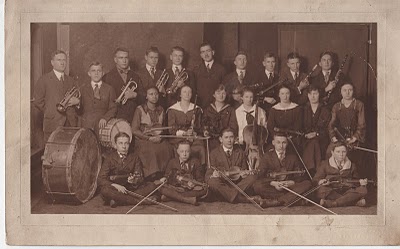 My paternal grandfather was an amazing man!  He is the boy sitting in the middle in the above picture.  The first time I remember meeting him, I was 16 years old.  I flew to Florida with my father…my first trip on a plane…and stayed with he and my grandmother for a week.  I was told they visited a couple of times during my childhood, but I have no memory of this.  He lived to be 100 and passed away in 2004.  He was still playing the violin, driving and using his computer!

He wrote a 35 page autobiography in the 90’s and I’d like to share some of it with you.  There are many stories that I’d like to share, but unfortunately, it was necessary to greatly condense it.  These are his words:

My ancestors came to Long Island from England and then settled in North Carolina in 1693.  I was born in Indiana and my father made a living repairing things, mostly watches and clocks.  In his spare time he made violins.  He was a nut about violins.  In fact, he would rather scratch a tune out of a violin than food out of the earth.

He told me in later years that he had made his first violin out of a shingle but when his father caught him playing it, he broke it into pieces.  The Quakers had strong beliefs about having too much fun and the violin was considered a tool of the devil.

My mother was a talented painter and painted professionally before she married Dad.  My father worked as a general mechanic for a period of time and one of the workmen gave me a large dry battery.  I began gathering discarded dry batteries that had been junked because of low voltage.  These connected in series would provide enough power to operate a small electric motor Dad had bought me, as well as a spark-coil.  The seed was sown.  That was the forerunner of me becoming a radio engineer.

My first job was picking strawberries on a farm about 3 miles from home, and I had to walk to work.  Next, I worked for the largest grocery store in town and was told I could eat anything in the store, and as much as I wanted, and I did.  I was 10 years old at the time and I suffered working the long hours.  I worked from 7am until 11pm, on my feet the entire time and then after the store closed I had to go with the delivery truck and deliver bushel baskets of food all over town.  I finished around 2:30am and then had to walk a mile home.  I usually couldn’t sleep very well after this because of severe leg cramps.

The next summer I worked for a sheet-metal company that made running boards, fenders and hoods for automobiles.  My pay was 7 cents an hour and I worked 10 hours per day.  I got a job at the “Remy Electric Company” the following summer.

About this time Dad began pressuring me to take up the violin, but I wasn’t interested.  He paid a teacher fifty cents a lesson to teach me, but when he decided I was spending too much time with electricity and not enough practicing the violin, he stopped paying the teacher.  My teacher told me that he would teach me for free if I wanted to continue.  I suppose it was just spite that caused me to continue with the lessons.  Later when I earned some money teaching violin, I repaid the teacher.

A friend had given me an old copy of the boy scout’s handbook that showed how to build a small receiver using a “coherer” and 2 electric door bells, and that’s how I made my first receiver.  My father had given me a nice seven jewel Elgin pocket watch in a gold filled case and I traded it to a school friend for a bunch of junk, coils, wire, a pair of headphones and a magnetic vibrator type battery charger.  When I brought the stuff home, I sure caught hell.  I got all of this for a bargain, because World War I had just been declared and the Commerce Department had stopped the use of all ham equipment.  Consequently, my friend had decided to get out of ham “wireless”.  The word “radio” was coined several years later.

He’s the fellow on the right

World War I was over and I got my ham operator and station licenses in 1920 and began operating legally.  Concurrently, I was taking violin lessons at the Metropolitan School of Music at Indianapolis, attending high school, and playing in the school orchestra.  When I was 16 years old, I decided to join the Musicians Union hoping to make a little money.  This was during the day of the silent movies.  I tried out for a job in the orchestra at the “Starland”, a local theater and got it.  The pay was $35 for seven days a week 2:00-4:00pm and 7:00-10:30pm.

I had various positions at the following venues:

He’s the tall guy behind the drummer

Many of the big name stars were in these shows, such as Eddie Cantor, Jack Benny, Al Jolson, Fannie Brice, Bob Hope, Dick Powell and Paul Whiteman.

In 1923, I married my wife and nine months later our first son was born, followed in 1929 with our last son. 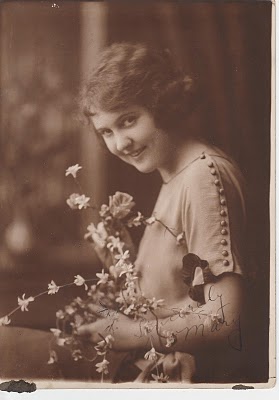 After retiring in 1969, I played for the Hendersonville Symphony, in North Carolina and gave violin performances at churches, the Salvation Army, and retirement homes.

My other positions were as follows:

Some of my other accomplishments include:

One of my favorite writers, Sydney Harris said “The violin is unique in that no other instrument sounds more heavenly when played well or more agonizing when played badly”.

Here are a few of my observations:

Knowledge, education, curiosity, imagination and perseverance all went into the making of the transistor and I believe the transistor and its progeny have done more for our scientific world today than anything else.  Just look at what has been accomplished with the use of electronics in medical science.  The microchip, which is nothing more than many tiny transistors in a small package.  It is extremely important in the space program, computers and most electronic devices.

Those five words: knowledge, education, curiosity, imagination and perseverance applies to anything worth doing.  There is a sixth word–challenge, which is of great importance.  All of these, coupled with an understanding of human nature are the ingredients necessary for getting along in this world.  It is also a good idea to practice “The Golden Rule”.

This was his 80th Birthday party.  They had a

40-year-old belly dancer for him.

The same belly dancer came out of retirement

8 thoughts on “My Amazing Grandfather”